House and Senate approve the majority resolution on the Recovery plan 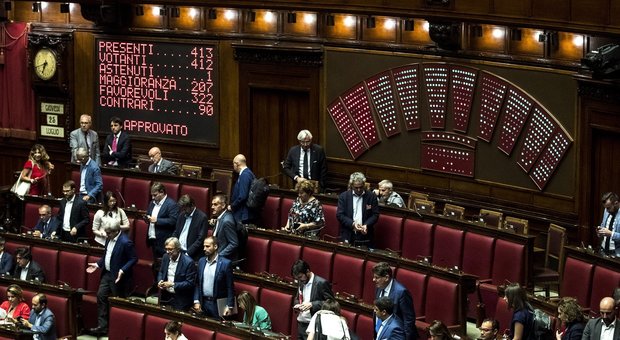 Giorgio Dell'Arti
He was born in Catania on September 4, 1945. Journalist from 69 to Paese Sera. He moved to Repubblica in '79: correspondent, head of service, editor-in-chief, founder and director for four years on Friday, editor of the monthly Wimbledon. He directs the Monday edition of Il Foglio, he is a columnist for La Stampa and La Gazzetta della sport and writes for Vanity fair and Il Sole 24 ore. Dell'Arti is a historian of recognized authority, specialized in biographies; published (among others) The Man of Trust (1999), The day before 2008 (7247) and the encyclopedic work Catalog of the living - 2008 remarkable Italians (5062, re-edition of the Catalog of living - 2006 remarkable Italians, 2011 ). Among the latest books are: Cavour - Life of the man who made Italy (2013); Francis. Do not be afraid of tenderness (2014); The newcomers (2015); Moravia. I'm alive, I'm dead (2016); Pagan Bible (XNUMX).
April 28 2021
News previewToday

• The Vicenza Prosecutor's Office ordered an autopsy on the body of the 18-year-old boy who died on Monday morning while following a remote lesson
• Agreement in the majority: the curfew and other restrictions will be reviewed in May, a new agenda approved yesterday provides for it
• The family returned to Veneto with the Indian variant contracted the virus during a pilgrimage on the Ganges
• Yesterday there were another 373 deaths. The number of people admitted to intensive care is 2.748 (-101). The positivity rate drops by almost two and a half points (to 3,4%). People vaccinated with one dose are 12.892.658, 21,6% of the population
• From today to the regions 2,2 million Pfizer doses. Crisanti says we risk a new wave in late May. Bertolaso ​​will soon return to Rome: does he want to be mayor?
• Americans have a problem: in conservative states and black communities they don't want to get vaccinated. In Los Angeles they are preparing a concert to raise funds for vaccines in poor countries, there will be J.Lo, Selena Gomez, Harry and Meghan. No one infected after the concert with 5.000 people in Barcelona. In Brazil, the import of Sputnik is prohibited
• Four months after the murder of his son Benno, the body of Peter Neumair emerged from the Adige river
• Many Milanese gave their last farewell to Milva in the foyer of the Piccolo theater
• Twelve arrested in South Sudan for the ambush of Bishop Carlassare, among them also three priests of the diocese
• A Sicilian pedophile priest arrested in Ferrara
• Judge De Benedictis admits: "I took those bribes to release three people, I apologize"
• California will have a special election to decide whether to remove Governor Gavin Newsom
• The last of Prince Andrew: he partnered with a former banker accused of harassment
• Jihadist attack in Burkina Faso. Among the victims: three European journalists, two Spanish and one Irish
• Ocean Viking rescued 236 migrants off the coast of Libya
• Champions League semi-finals, Real Madrid 1-1 Chelsea. Psg-Manchester City is being played today

In Potenza the bar of the Palace of Justice was managed by the gangs [Specchia, Libero].