Español
Uncomfortable diary A young African sweeps the streets of Mestre from morning to night: ...

A young African sweeps the streets of Mestre from morning to night: fined! 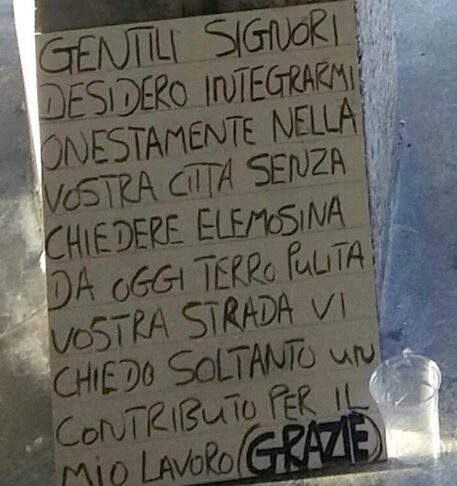 Roberto Tumbarello
Roberto Tumbarello, professional journalist, graduated in Law, has three children and six grandchildren. Medal "pro merit" of the Council of Europe, of which he has been spokesman in Italy for many years, is expert in Communication and Human Rights. He was editor and special envoy of several large circulation newspapers and periodicals. He ended his career as editor of the "Giornale di Napoli". Among his latest successful publications: "Was Jesus Right or Left?" (Sapere 2000, 2009), "Save yourself who can" (Edizioni Radici, 2012), "Either the bag or the life" (Armando, 2014), "Journey through life" (Armando 2017), currently in the bookstore.
30 September 2019
Uncomfortable diary

He has a sign on his shoulders. "I will keep your city clean because I want to integrate." People take him in sympathy and, to reward his good will, he gives him some coins. The brigade, on the other hand, fines him 350 euros for illegal activity, that is to do the work of the garbage collectors without the proper authorization. Someone indignantly attends the scene and warns the Mayor. Then the police command cancels the cruel penalty and apologizes to the poor negro. The accident was not caused by feelings of racism but by the inexperience of new hires. So, no disciplinary measures, just the shitty figure.

We lacked only artificial intelligence to undermine the already claudicating democracy

There is no doubt, this discovery far exceeds human intelligence which unfortunately is on average low. Its application - born to integrate our poor intellectual abilities - is unfortunately used to distort the truth. This was demonstrated, first in Italy, by "Striscia la storia" in Renzi's humorous gag who insults government allies in words and gestures. And it looks like him. Indeed it is he, manipulated. Many have fallen for it, and many others will fall for it. It will only get worse as long as science and technology are only used for scams and scams. With us especially in politics.

Please, let's not talk about euthanasia, which can mean murder

Not only is it wrong, but it is also dangerous. It hides evil deeds in humanitarian form. The country does not wait for parliament to legislate on euthanasia. It is a crime that in the rampant corruption in which we live would lend itself to possible killings for issues of interest. Instead, we need a law that allows the interruption of therapeutic obstinacy. In order not to remain attached to a machine that replaces the heart and other vital organs? Think of the poor Hon. Cappato, radical, forced to act as Charon with Switzerland as if it were a public service from beyond.

The idiots who whistle the billionaire footballers believing them niggers

Just stupid these fans who insult the black opponents believing to offend them. The referees take them seriously and Dalbert, Lukaku, Cuadrado and many color swatches pretend to be outraged. In reality he doesn't care. They are billionaires. Negroes are the poor people who find it hard to get to the end of the month, who are exploited if they find work, who are beaten by cowards in groups, which the bus driver does not stop to pick them up. Kulibalìy and the others do not invoke the suspension of the game if the children of migrants do not have access to the school canteen. That's racism.

Here the seats are glued to the armchairs, but also elsewhere

When I wrote that Elizabeth is now too old to reign especially in a period in which the arrogance of the prime ministers is particularly dangerous for democracy, I was afraid I had gone too far. Today, however, it is the English Supreme Court that thinks the same way. Without mentioning the inappropriate consent of the sovereign, she says that the suspension of parliament was illegal. It is not permissible for the government to make decisions such as Brexit without the opinion of the people's representatives. Despite the fool Borsis Johnson does not want to resign. Nor the queen. The whole world is country.

That's why it's better to keep silent, work, suggest and, if possible, lead by example

Every day for years, some people, considering themselves more efficient than others, have taken the initiative to communicate to voters what they intend to do (or will do when in power). Others blame those who don't do what they didn't when they were able and could. The sarabanda of projects and criticisms, which give rise to boring interviews and repetitive talk shows, is useless. But nobody realizes it. In fact, however ignorant and unwary the citizen may be, he has the opportunity to see for himself what has been achieved or forgotten. And also of what is unlikely.

That little Swabiangave with an extra gear that we dislike

I too - ignorant as all those who judge, although not able to talk about climate change - are skeptical about human intervention. I consider it a small thing in the face of the multimillennial grandeur of the universe. That's why, I consider the sacrifice they ask us to decrease CO2 emissions almost useless. But I have infinite gratitude and admiration for those who have awakened the world from torpor. There are also young fascists and communists, lazy by boredom, now motivated by a social mission, thanks to a girl apparently insignificant but with an enviable charisma.