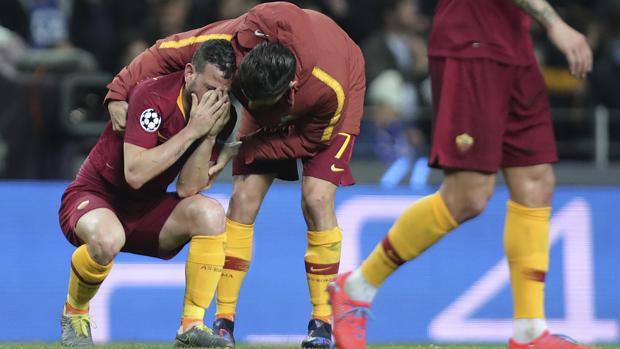 Giorgio Dell'Arti
He was born in Catania on September 4, 1945. Journalist from 69 to Paese Sera. He moved to Repubblica in '79: correspondent, head of service, editor-in-chief, founder and director for four years on Friday, editor of the monthly Wimbledon. He directs the Monday edition of Il Foglio, he is a columnist for La Stampa and La Gazzetta della sport and writes for Vanity fair and Il Sole 24 ore. Dell'Arti is a historian of recognized authority, specialized in biographies; published (among others) The Man of Trust (1999), The day before 2008 (7247) and the encyclopedic work Catalog of the living - 2008 remarkable Italians (5062, re-edition of the Catalog of living - 2006 remarkable Italians, 2011 ). Among the latest books are: Cavour - Life of the man who made Italy (2013); Francis. Do not be afraid of tenderness (2014); The newcomers (2015); Moravia. I'm alive, I'm dead (2016); Pagan Bible (XNUMX).
March 7 2019
News preview

Roma, after 120 minutes of play, were eliminated from Porto in the Champions League round of 3. The 1-2 goal in the second extra time was decisive, a penalty awarded after consulting the Var, but very doubtful and eventually achieved by Alex Telles. The referee did not go to check on the screen a penalty foul committed by Porto in the last few seconds. In the other eighth of the evening at the Princes' Park in Paris, Manchester United sensationally eliminated Paris Saint-Germain, also due to a duck by Buffon. The French, who had won 0-3 in the first leg in England, were defeated 1-90, with Rashford's decisive goal on penalty in the XNUMXth minute.

The eleven guys who beat Real Madrid next year will almost all go play somewhere else. It is the Ajax philosophy: «buy, enhance, resell, reinvest (in structures, such as the magnificent Amsterdam Arena). The example is Frankie de Jong, a formidable median of 21 years: bought for one euro from Willem, in June he will go to Barcelona for 75 million. Many could follow him: from the central defender de Ligt, for whom Juve is willing to invest 70 million, to the Brazilian half-point Neres, from the left-back Tagliafico to the imaginative Ziyech. All on the market, none excluded. The eleven holders lined up on Tuesday cost 50 million: a misery, compared to what will be obtained "[Passerini, CdS]