Dine on the boulevards of New York City 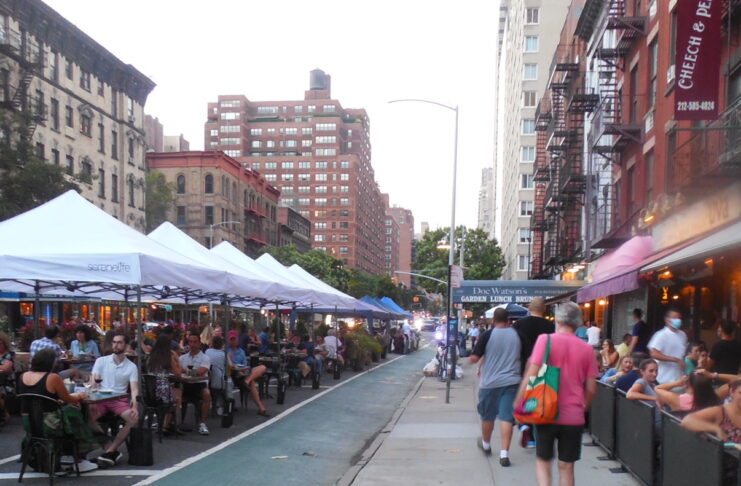 Sun Serafinihttp://www.VideoAge.org
Domenico (Dom) Serafini, from Giulianova resides in New York City and is the founder, editor and director of the monthly "VideoAge" and the trade fair newspaper VideoAge Daily ", aimed at the main international television and cinema markets. After graduating as an industrial expert, at 18 he went to continue his studies in the US and, to finance himself, from 1968 to 78 he worked as a freelance for a dozen magazines in Italy and the USA; obtained the FCC license as a radio operator, he worked as a DJ for three radio stations and produces television programs in Long Island, NY. In 1979 he was appointed director of the magazine “Television / Radio Age International” in New York City and in 81 he founded the monthly “VideoAge.” In the following years he created other magazines in Spain, France and Italy. Since '94 and for 10 years he has written about television in "Il Sole 24 Ore", then in "Il Corriere Adriatico" and trade magazines such as "Pubblicità Italia", "Cinema & Video" and "Millecanali". Currently he collaborates with " The Messagg ero ”from Rome, with“ L'Italo-Americano ”from Los Angeles”, “Il Cittadino Canadese” from Montreal and is a columnist for the newspaper “AmericaOggi” from New York. He has published numerous volumes mainly on media and communications issues, including "Internet Television" in 1999. From 2002 to 2005, he was a consultant to the Italian Minister of Communications in the international audiovisual and television sector.
August 22 2020
News previewLetter fromLetter from New YorkToday

Despite the encouraging numbers, Cuomo does not want to let his guard down and still does not allow restaurants to serve at the table inside the premises.

In the meantime, the problem has been solved by allowing restaurants to place tables in front of their shops on the streets and avenues of the cities. In New York City, the operation is called the “Open Street Initiative” and will last until October 31st, involving 9.000 restaurants, which may remain open until 23pm. The initiative extends over 00 kilometers of roads and avenues.

In the photos, several views of the open-air restaurants on Second Avenue in Manhattan.