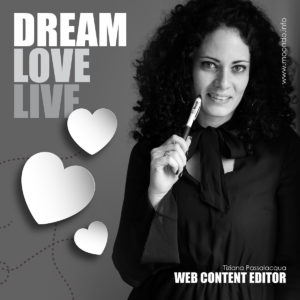 Tiziana Passalacqua
33 years old and mother of three wonderful children. In love with my family and, very often, I am more of a child than them! I love my job which, in addition to giving me satisfaction, represents my moment of leisure during the super busy days!
March 2 2021
People of MoondoNetwork

Roberto Procaccini's first album, “Verticale”, was released on February 22, 2021. It is an intimate, personal album, in search of himself and through a delicate reflection on the time that passes and on the time to chase. A reflection resulting from his experience as an artist and as a man, after years of collaborations with great artists such as Max Gazzè, Carmen Consoli and Paola Turci, among others.

After years of collaborations, can we say that the real Roberto Procaccini comes out with “Verticale”?

Yes, absolutely. Or at least it is the first of other steps that will come in order to continue the vertical journey of knowledge and rediscovery. The important thing was to get naked and not take refuge in 'comfort zones' that would have ended up dispersing the determination with which I faced the journey. To do this I wanted to banish a certain aesthetic aspect of music (which often comes automatically) to focus on the substance, the only one capable of best describing what I wanted to represent. To do all this I had to search for a language that could synthesize my many and very different musical influences and create a new and homogeneous world. I find it difficult to label or tag him, but what is ultimately important is that he recognizes me 100%..

Beppe Vessicchio and Max Gazzè define your album as “a comfortable place”, “a room of creation”. How did the process of creating such a thoughtful album start?

It comes from an inner and profound need that I personally had never felt before. I don't think there are rules or established paths, everyone favors their personal motivation, trying to use their own artistic means to be able to describe it as they can. In the end, what matters is the level of communication and empathy that can be established. I am convinced that music has enormous evocative power. The greater this power, the higher the level of communication it can establish, the clearer the cause and effect process.

You used travel as a source of inspiration. A crucial stage in your creation process?

Not a single stage, but several, and all linked to moments of confrontation with friends and trusted people during processing. It will seem trivial, but for me the comparison has never been easy precisely because of those insecurities that I faced with this record. Grasping their reactions, impressions but also suggestions and advice, have been for me priceless moments of growth and awareness of being on the right path.

A reflection on time that ranges from that of a time to remember and to live. How are these emotions conveyed with music?

I followed my instincts, my approach and my artistic resources as tools to define sound worlds, so everyone is different. Certainly I took time to describe time, intended as a musical space. The songs have a continuous evolution, sometimes slow, sometimes rapid. I used minimal elements at the center of powerful sound worlds to describe a fragility in chaos, I used melodic loops that dynamically vary from pianissimo to fortissimo to represent the repetitiveness of our actions within a world that changes around us. They weren't conscious choices, but if I look back and listen again, I recognize what I meant. And for me it is an important goal.