Joe Biden is the new president of the United States 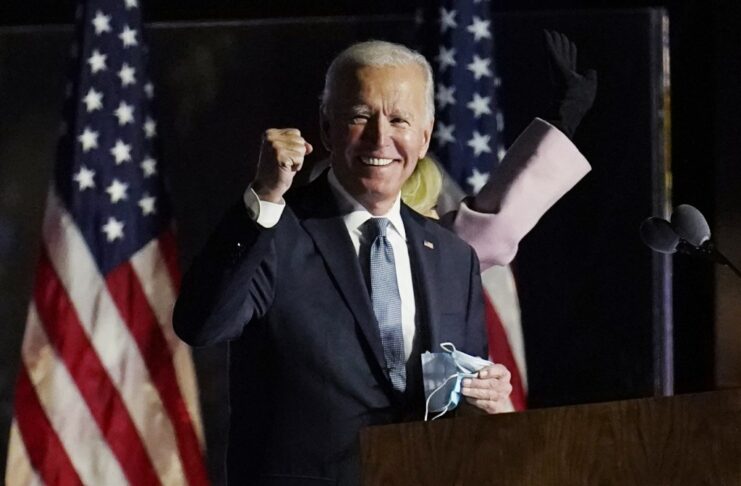 Sara Berettoni
Fair of his native village. Civita Castellana (VT), vintage 1986. Under the sign of Capricorn. I am stubborn, eclectic, passionate, writer. A "Volatile", but with her feet on the ground ....
November 9, 2020
News and curiosities from the world

Press review from 2 to 8 November.

After a long wait of four days and eight years later, Joe Biden returns to the White House. No longer in the role of Obama's right hand man, but as a point of reference, an epochal turning point for the future of the country, as the 46th president of the United States of America.

Joining him for the first time will be a female African-American vice president, Kamala Harris. Former prosecutor of San Francisco first and then of California, she had already won a seat in the Senate in 2016, the year of Trump's victory, immediately deciding to declare war on him.

A pair, that of Kamala and Joe, formidable, the most voted in history.

"The work ahead of us will be difficult but I promise you this: I will be the president of all Americans. I am honored that the Americans have chosen me as their president”Tweeted Joe Biden.
"I will be a president who unites and not a president who divides. Let's listen to each other again, we are all Americans". These are Joe Biden's words of reconciliation in his address to the nation.

As Kamala Harris takes the stage dressed in white, greeted by stadium cheers, waving flags and crazy horns, she speaks to the nation "You have chosen hope, unity, science and above all truth".

The first commitments of this campaign go to the fight against the pandemic, health, migrants and the climate.

"There are no blue, red states. The United States exists. Let's give each other a chance by helping each other”Says Biden.

Trump meanwhile does not take the defeat very well and says his legal offensive against the election result will begin on Monday, to ensure that the electoral laws are respected and the legitimate winner is elected. "This election is far from over. Joe Biden's victory was not certified in all states".

Coronavirus, the 10 countries in the world with the most cases

The total cases are more than 1 million and 205 thousand, with over 32 thousand deaths.

Continuous street demonstrations against Alexander Lukashenko's re-election have resulted in around 300 arrests by police. The processions are organized every week and the arrests are continuous and spare no one: journalists, Olympic athletes, local media.

The boss of Belarus is accused of electoral fraud that gave him the seat in the presidential elections on 9 August. Europe also rejected the legitimacy of the vote, imposing sanctions against the regime, but the Minsk authorities suppressed the protest with arrests and violence.

About 5.000 protesters tried to march from the historic Democracy Monument to the Royal Palace with the intention of delivering requests for the reform of the monarchy to King Maha Vajiralongkorn, but were intercepted and stopped by the police.

A pro-democracy demonstration that is not frowned upon by the authorities who had already declared an area within a radius of 150 meters from the Royal Palace off limits. For the second time, the police had to cool down the heat of the demonstrators with fire hydrants.

The Spanish emergency services reported the highest number of landings ever recorded in the last 10 years. Over 1600 African migrants have landed in the Canary Islands. Over 1.000 arrived on board around twenty boats in the islands of Gran Canarie, Tenerife and El Hierro, where a body was found.

A real surge in new arrivals has been registered in recent months after the border agreements reached between the European Union and Libya, Morocco and Turkey.

Disconcerted figures, as reported by the Spanish Minister of the Interior, with over 11 illegal migrants, over 7 times more than in the same period last year.

An article published by the British tabloid "The Sun", according to which Russian President Vladimir Putin intends to resign due to health problems, is causing a sensation.

Kremlin spokesman Dmitry Peskov denied the article by assuring that the incumbent president has no such plan and that he is in excellent health.

To fuel the rumors of the tabloid would be the latest images of the president who see him with a strange face, who contracts in a grimace of pain, with legs always in constant motion and with the fingers of the hand that contract while clutching a cup that would contain painkillers .

For the first time since the beginning of the pandemic, Queen Elizabeth II appeared in public wearing a mask.

As reported by the BBC, the Queen wore the mask at the memorial ceremony that took place in London at Westminster Abbey before Remembrance Day on 11 November, the day the UK pays tribute to those who have lost life in war. The commemorations this year will be reduced due to the Covid emergency.

The mask chosen by the Queen is of black fabric with white borders and should have been made by Angela Kelly, personal adviser and stylist of Elizabeth II.