Español
News and curiosities from the world The new president of the United States, Joe Biden, tackled by Major

The new president of the United States, Joe Biden, tackled by Major 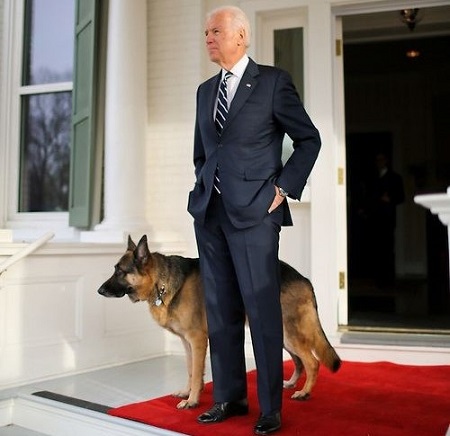 Sara Berettoni
Fair of his native village. Civita Castellana (VT), vintage 1986. Under the sign of Capricorn. I am stubborn, eclectic, passionate, writer. A "Volatile", but with her feet on the ground ....
November 30, 2020
News and curiosities from the world

Press review from 23 to 29 November

The new president of the United States of America, Joe Biden, was not knocked down by his tenacious opponent Donald Trump, but by his playful German shepherd Major who, between one race and another, caused the president a microfracture in the right foot, with the obligation to wear a brace for several weeks.

Biden, who recently turned 78, is considered the oldest president in history, with an excellent state of health, also made known during the election campaign, to reassure and make his candidacy possible and compatible. For now in the White House you just have to pay attention to Champ, the other German shepherd in the house.

According to WHO data, updated as of November 29, the highest daily increase in the last 24 hours was recorded in the United States of America with 175.669 cases.
Second place remains with India followed by Brazil.
In fourth place is Russia with 26.683 daily cases and in fifth place Italy with 26.315 daily infections and 54.904 total victims since the beginning of the pandemic.
In sixth place we find the United Kingdom, followed by Poland and Germany with 14.611 cases.
Iran is also in the ranking with a total of 13.402 daily cases and 47.874 victims since the beginning of the pandemic.
The ranking of the 10 most infected nations closes: Ukraine with 12.978 cases per day.

The suicide attack caused by a car bomb that killed 28 members of the Afghan forces on November 30, injuring 27 others has not yet been claimed.

As reported by Ansa, the bomber detonated the vehicle full of explosives outside the base of the public protection forces in the province of Ghazni, causing the tragedy documented by the head of the public hospital, Baz Muhammad Himmat. For now there are no reliable sources that can ascertain those responsible, but they are usually attacks by the Taliban against Afghan forces.

"FreedomWas the cry of protest shouted by the French on their first day of freedom after the rigid lockdown. Thousands of French took to the streets in the streets of Paris, Lyon, Bordeaux, Marseille, Grenoble, Montpellier for the March of freedom.

A protest against the "liberal-killing global security" law which sparked off police violence first against migrants, then against music producer Michael Zecler who was beaten during a check.

The beating was documented by some surveillance cameras and four policemen were suspended.

50.000 people participated in Paris, in a peaceful procession, stained by the presence of the black bloc, which devastated the square and launched tear gas over the entire Marais district, in the streets full of shops between the place de la Republique and the Bastille, destroying and setting fire to some nearby shops.

Facing the protest were 20.000 gendarmes and policemen, far too few to keep the protest at bay and ensure safety.

A manifestation of strong dissent against the government and its choices, with very strong jokes and hostile chants against the police and that infamous article 24, approved on November 24 by the national assembly, which provides for a ban on photographing or filming policemen on duty during demonstrations.

On 25 November, in a completely unexpected moment, Diego Armando Maradona, the number 10 in world football, leaves us at the age of 60, due to a cardiac arrest caused by acute pulmonary edema, a diagnosis reported by the Argentine newspaper Clarin, the first to give the news of the disappearance of the champion.

An unexpected death that shocked the world of football and beyond.

A large crowd supported and cried Diego during the procession that started from the Casa Rosada in Buenos Aires, up to the Bella Vista cemetery, where Diego was buried, next to his parents, his father Don Diego and his mother Dona Tota.

A Napoli shirt with the number 10 was placed on Diego Maradona's coffin displayed in the presidential Casa Rosada.

The shirt was delivered by the Italian embassy in Buenos Aires, and was placed on the coffin, close to that of the Argentine national team, Boca Juniores and Argentinos Juniors, by one of Maradona's daughters.

After a delicate brain operation on November 2nd, Maradona had returned to his home in Tigre to continue his convalescence, but unfortunately something went wrong and today his death is at the center of the controversy.

The focus is on the time of death and the role of the rescuers. Very heavy is the accusation of the lawyer, Matias Morta, who points the finger at the delay of the ambulance of about half an hour and on the health workers, who should have provided assistance by taking care of him, but who from the latest reconstructions, would have left Maradona alone. for more than 12 hours.

The coroners who carried out the autopsy during the week will complete the toxicological analyzes specifying whether Maradona, before dying, had ingested drugs, drugs or alcohol.

A world shock for the loss of the "God of football".

An indescribable mourning for the Neapolitan people who have always considered el Pipe de Oro as a myth, pure legend. A greeting of prayer and emotion from Pope Bergoglio and a farewell tweet from Prime Minister Giuseppe Conte.

The loneliest elephant in the world, Kavaan, was transferred to Cambodia on 35 November after spending 29 years in a dilapidated zoo in Pakistan.
After the long period of solitude and due to constant mistreatment, the poor elephant began to suffer from physical and mental health problems.

Fortunately, in 2015, a group of animal rights activists started a rescue campaign for Kaavan. Free The Wild, an animal welfare organization co-founded by American pop star Cher, was the first to commit to animal protection by making a major contribution to the relocation confirmed on May 21, 2020 by the Islamabad High Court.

In the first phase of the transfer, Kaavan will be placed in solitary confinement for a month after arriving in Cambodia, and will subsequently live with 3 other Asian elephants.

In the meantime, Cher arrived in Islamabad and attended Kaavan's farewell ceremony and was later received by Pakistani Prime Minister Imran Khan who publicly thanked on Twitter for the successful transfer of Kaavan to Cambodia.

337 people were sentenced to life in prison for participating in a failed coup in 2016, resulting in the deaths of 251 victims. On November 26, another 60 defendants were sentenced to lesser sentences, 75 were acquitted. Among the convicted people are military and civilian aircraft pilots who had directed the operations.

The Turkish government, as reported by the International daily, had attributed the plot to the preacher Fethullah Gulen who had denied his involvement.

An Austrian village that has about a hundred people, in recent years has been attacked and publicly mocked for its misunderstanding name: FUCKING (which evokes the well-known insult in English).

After the advent of the internet there was no lack of teasing and the countless photos taken under the sign at the entrance to the town have mocked and tired the inhabitants to the point of forcing them to a drastic decision, the official change of the name from FUCKING to FUGGING .

A not entirely easy undertaking, which has always seen the residents near the sign in favor of the name change, while the inhabitants inside the village opposed because they are linked to the origin of their town.