Gianfranco Salomone: make-up is not enough 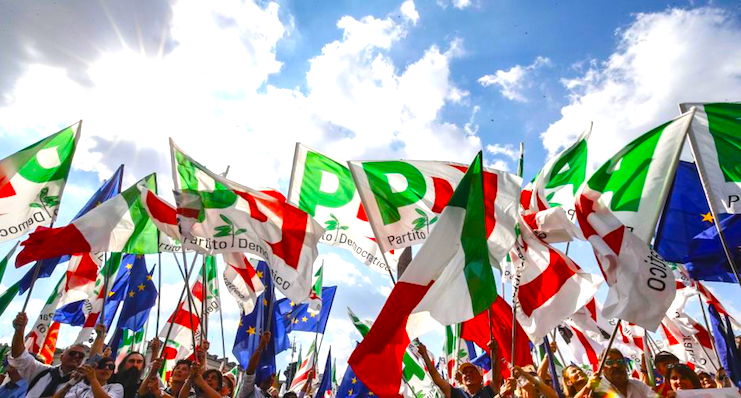 Claudio Velardi, in the interview with Gianpaolo Sodano for Moondo, stimulates more than a reflection on the future that awaits the PD and, more generally, the entire national political framework, starting from the conclusive observation that identifies in the "danger of going to the opposition" the final fate of the party that belonged to Gramsci and Togliatti. A century-long road that leads to the abyss.

The retreat into "power", in the context of a democracy open to globalism, is the antithesis of the nature and reasons that innervated the old PCI, of which the current PD is the shadow of a hand projected on a hazy background , not to mention a semi-serious caricature.

The strength of the PCI derived from a revolutionary expectation following the example and the driving force of the Soviet revolution. The Livorno split, in 1921 when the maximalist and revolutionary fringe left the Socialist Party, had a myth and a goal: power to the working class and the conquest of the state. Both results were impossible in the Italian reality, both in the period before the Second World War and in the fifty years after, coinciding with the rise of the Soviet Union as a world power (as opposed to the American one) until the collapse of the Berlin Wall ( in 1989) and its subsequent disintegration.

Fascism first, with the end of democratic rules and the consequent dictatorship, closed the way to the possible attempt of an opposite dictatorship, that of the proletariat. Then, the Yalta agreements of 1945, which divided the world into two areas of belonging, with Italy located in the western sphere, prevented any autonomous action by the PCI for the assault on power.

The largest and best organized Communist Party in the West had a strong grip on Italian society, and managed a "power of its own", almost a parallel state, with the control of local authorities, municipalities and regions, of trade unions and associations representing millions of citizens and workers, but forced into a constitutional and democratic system that cut its roots of origin at the base.

The strength of the PCI definitively came into play for the "conquest of the state" when the party definitively dismissed its revolutionary guise, starting with the abandonment of the name, PDS, DS, to end up with the PD and unity of action with a force antisystem like the 5Stelle movement. A party that was itself a system that ended up in the anti-system.

Gramsci's ashes will have evaporated upon ascertainment. Those of Togliatti will have held up better, considering the cynicism (which is substantially different from opportunism) of the undisputed leader of the old PCI.

This digression leads us to understand the transformation that has gradually occurred in that political entity which today appears to be the PD. The substantial turning point took place at the beginning of the 90s of the last century, almost in conjunction with the phenomenon that was defined as "clean hands", which led to the dissolution of the old parties that had represented the backbone for fifty years of governments and of Italian democracy, the DC, the PSI, the Liberal Party, the Republican Party, the Social Democratic Party.

On those ruins the Communists built their final fortune, the party entered at full sail into the rooms of power, from which it has never left. It was the fulfillment of a different process from the one hoped for, namely the achievement of a "complete democracy", as it was then used to define, that is, full participation in the leadership of the country. At that juncture the opposite vulnus was produced, only the heirs of the PCI were entitled to govern, so "democracy" ended up identifying itself with the heir formation of the PCI, the current PD. It was the triumph of "diversity" and of the alleged Communist "superior morality" which, in a contradictory way and through the most disparate mix of power, acquired control of Italian politics.

Berlusconi's descent into the field, with his Forza Italia set up in a nutshell, prevented the formation of a new regime, this time under the leadership of the post-communist, towards which the groups of economic and financial power, public and private ruling classes. The "joyful war machine", dreamed of by Achille Occhetto for his PDS acquired another skin and took on other colors.

Over the past thirty years, the PD has long been in power, for 18 years or more, including those in progress. It has given life to disparate and composite alliances, it has chosen leaders from the ranks of the hated opponents, the DC, the party of the "forks", ending up changing nature and behavior. By the way, in the interview released by Caudio Velardi, there is no mention of what was called the merchant bank of Palazzo Chigi, with the president Massimo D'Alema of which he was listened to as adviser. A chat page, which has remained obscure. But, you know, the reprobate were those of the old pentapartite, all more or less killed, not only figuratively. Honor, always, to Greganti, the man who took on his shoulders all the responsibilities of Botteghe Oscure in matters of hidden financing, stopping the investigations that could have led the Prosecutor Nordio to the next door, the one that opened onto the secretary's room.

And here, round and round, the heirs of the glorious PCI find themselves at the same point as the opponents of the past, with the aggravating circumstance that they have no alternative: either power or the end. This is how Claudio Velardi puts it, an intelligent man with a refined culture, a person who knows the life, death and miracles of the "political animals" that practice the new rooms and the ancient ambulatories.

Unless sensational and disruptive facts intervene, the "end" of the PD is not around the corner. The policy followed in recent years has started it on a path of slow consumption, but the capillary structure, with the local interests deriving from it, continues to hold and will be able to hold up for a long time. The real danger is another, the lack of political strategy linked to unnatural alliances like the one with the 5 Stars. A deadly embrace that has already cost Zingaretti the secretary's chair and undermines, in the background, that of Enrico Letta, the new leader with his eyes turned to the past.

The PD is absent from economic policy, in the international one it does not go beyond lying on the European Union, but without a vision of modernization of the community structure in accordance with the evolution of the general framework, starting from the Italian position in the events of the Mediterranean, in the field of civil justice he is silent, in the criminal field he is entangled with the destructive grillin positions of the very essence of law, he does not draft a reform of the judicial order and he is silent on that of the public administration, elegantly bypassed and left at stake by a convinced reformist , such as the minister Renato Brunetta.

To put it plainly and thoroughly, the PD represents the opposite of reformism, of a non-ideological policy able to face the realities as they are and work to modify them in a useful sense for ordinary citizens in step with the evolution of the times. It is a party firm in the positions of the reached power, of the central and local government. If he abandons those positions, he decrees his end. It could survive in the future only by finding a revolutionary spirit with respect to everyday problems, but it cannot do so because it would be abandoned by the electoral groups and the centers of power that constitute its backbone, decreeing its suicide. He is forced to live in power, which slowly dissolves him, overturning Giulio Andreotti's metaphor of power that “wears out those who don't have it”.