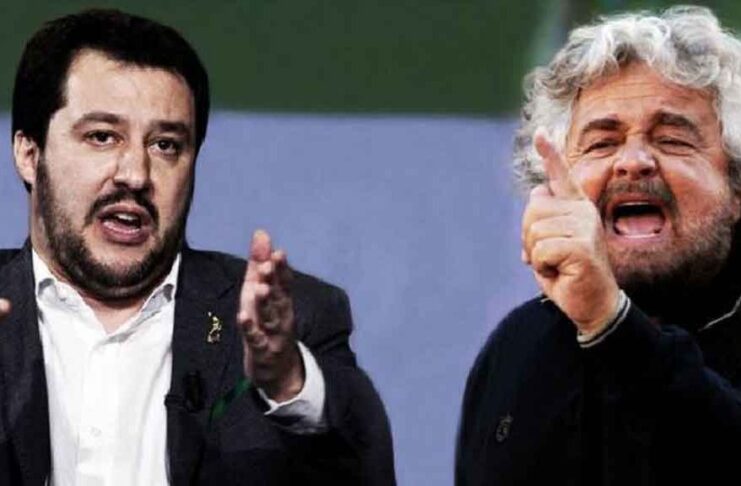 There is an ancient Roman saying that is well suited to Beppe Grillo and Matteo Salvini: "they discover in gold like Marcus Aurelius ". The bronze statue of the Roman philosopher emperor (the authentic one placed in the shelter of the Capitoline museums), has golden reflections that suggest its original appearance.

The sortie of the two heroes of current Italian politics allow us to discover their true nature.

Beppe Grillo, comedian by profession, raised to father of the grillina homeland and, alas, a protagonist of national politics, performed in a television show in defense of son under investigation (along with others good guys), for raping a girl in the family villa, located in the proletarian resort of Pevero in Porto Cervo, a town on the Costa Smeralda.

The prophet of justicialism, instead of apologizing, with folded hands, to the girl for the insult suffered, doing it on behalf of the son and for himself worthily representing him, lashed out at the girl for being reported late (8 days). 'shame suffered, and against the investigating magistracy for having slapped the angelic son. For the national Beppe, the evil, almost and the crime, was committed by the young woman who, drunk by dint of vodka, did not react. in conclusion  there was!

Here he is, the avenger of the crimes of others, the executioner of Italian society, who turns out for what he is. To put it in the Roman style, a paraculo cor bang, that sends golden flashes of his intimate nature, that at the first opportunity, at the great test of existential behavior, the man, indeed the comedian, when the circumstance calls him to give proof of his guaranteeing convictions, from out of his head and mouth as it happens in the regurgitation of a sewer.

Matteo Salvini, for his part, is unable to stay within normality. Aided by unexpected luck, his League returned to the government due to the crisis that devoured the Conte 2 government. full powers, and attendance of Papetee, in the summer of 2019 he noisily came out of the Conte 1 government convinced to go to early elections and take a bite of political opponents. He had stayed with the torso in hand. Only the inability of the Giallorossi government and the detachment of Renzi that had produced the crisis, had brought it back to the surface, thanks to the executive led by Mario Draghi, in a sort of national unity from which only Meloni with Fratelli d'Italia she called out.

So, the day before yesterday, the brave defender of the VAT numbers gave his head on the curfew time, he wanted 23 pm instead of 22 pm as his ministers had also agreed. If an hour may seem short, think of poor Martino who for a point he lost his hood of abbot.

Well no! On these things you cannot give up, the brave Matteo from Lombardy has almost won it, but he does not realize that his League is slowly giving up on him. He miscalculated. Draghi is not Conte, severe precedent it already constitutes a test, at the second, it is to be expected, the door will be slammed in his face.

Tormented by Giorgia Meloni's run-up, who is winning him consensus and aims to overcome him, Salvini will soon make a new masterpiece. In the League the reinforcement is already ready, his name is Giancarlo Giorgetti, he is minister for economic affairs, he has burning dossiers on the table, from Ilva to Alitalia, he is listened to by the Italian financial and industrial circles, has civil and constructive relations with organizations workers and employers' associations, has shown a European vocation that kicks with Salvini's embrace the sovereignists of Hungary and Poland. The step is short, it is only a matter of time, it will be a short time.

The two characters just described have a common trait, which makes them the same and different.

Beppe Grillo, is leading to destruction the axis between Movimento 5Stelle and Pd, before it is born. The crisis will not only be in the 5Stelle, already devoured internally, it will also extend to the Democratic Party, with the new secretary Enrico Letta who did not understand the need to free himself from a deadly embrace that has already led to the resignation of his predecessor, Ni cola Gypsies.

Matteo Salvini, for his part, has laid the seeds for the rupture of the center-right alliance, with Meloni now playing on its own and Forza Italia which will necessarily have to distance itself from an ally that is proving to be destructive.

Two birds with one stone. The great star of Italy begins to produce its effects.