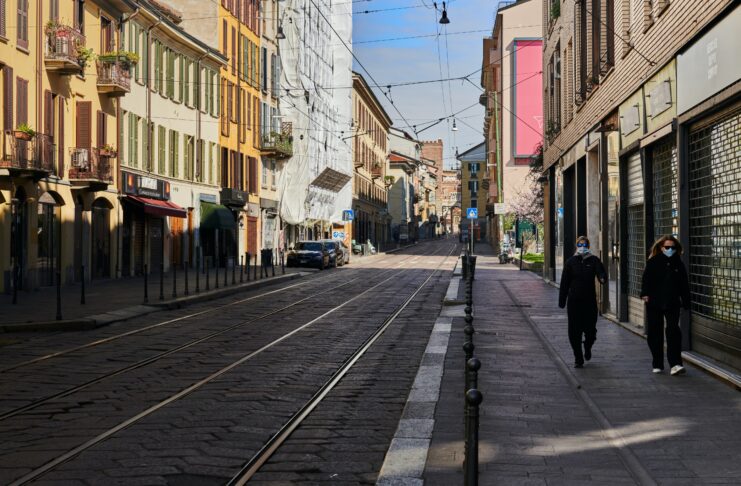 In this 21st century we had so far had 19 rich, serene and joyful Christmases, some cold, other myths, at least in this Rome with a blue sky by definition. Instead in 2020 a different Christmas, certainly sad, poorer, less attended: a Christmas of war.

In this unfortunate 2020, the over XNUMXs have relived the history and images of their childhood or the Second World War: all closed at home, distant relatives unreachable, closed shops and long lines, even very long ones, at pharmacies and supermarkets. Today there are no ration cards that there were then, but credit cards are almost mandatory not only by law but because ATMs find the withdrawal stations already emptied!

Christmas 2020 without joy, separated families, hot telephones, elderly people barricaded in the house, exiled to the countryside, afraid of the risk of imminent death; young people under house arrest, without nightlife, without companions, without love, frustrated hopes! It is the punishment for an unbridled summer in Italy as in all of Europe, when we have gone from a few sporadic summer infections, to thousands and thousands of daily winter infections and equally for the deaths in Italy that rose in the two periods, from a few dozen in July, to many thousands in December. The exact numbers do not count, a few days higher a few days lower and even the curves are variable and unreliable, the real problem is that we are in full blizzard anyway.

The government does what it can, who would do better? In Italy and abroad. The English example is catastrophic, the British tried to be different as usual and they succeeded: for the worse! Now they have run for cover, but it is too late, even the virus has changed and therefore there is no certainty about the effectiveness of the current vaccine.

Christmas of war, without the joy of living perched, willy-nilly, in the defense of life, without the usual sociability characteristic of this fertile Italy of family and friends solidarity. With the Lock down of the red areas the figure of the “neighbor” grows in size, as in the America of continuous migrations, without roots. As in Italy in the 40s, when salt, oil and even bread were exchanged between the houses. The enemy has changed, no longer the bombs announced by sirens and unloaded from aircraft despite the barrage of anti-aircraft machine guns, but the virus, this ultra-microscopic protein announced by sneezing or coughing. And again all with masks or face masks on the street, then to protect against poisonous gases and the fumes of corpses buried under the rubble caused by bombing, now against the virus-laden microparticles that are thrown from infected mouths towards other mouths not protected. Therefore, the enemy to defend against is different, but the "muzzle" effect is the same.

Christmas as a prisoner. Those who have had real house arrest tell us that the abominable condition inflicted by the judges is still better than this one imposed by the Government, because in it direct contact, albeit authorized, with relatives and friends is not prevented.

Waiting for the Befana. What will happen after the war Christmas? What January awaits us? The weather announces weeks of cold and snow, a habitat favorable to the multiplication and spread of influenza viruses. Will the vaccines arrive promptly? For now, the announcements with "great pomp" have brought Spallanzani to Italy only 9500 doses for the entire country, that is for the 107 Italian provinces. It seems that 1000 will remain in that hospital or rather in that pilot IRCCS, the others will be divided among the 107 provinces, that is less than 80 each, which for over 40 million Italians vaccinated, is 2 × 1000: the drop in the bucket. So much media noise for nothing? Maybe yes, but the mass media are irrepressible and politics is not always in good faith. It was enough to point out that these first doses had a symbolic value, without showing on TV the departing trucks overloaded with the necessary to vaccinate, without inducing useless expectations and painful disappointments. In any case, vaccines will be there sooner or later and they will save us and even the so-called allergic sufferers, because it is not the itch that causes real damage.

Unfortunately it will take time to really start the vaccination campaign: no one can hope to be sheltered before Easter. The fear is that the hard months of winter will pass between one limitation and another and that perhaps after the war Christmas we still have a war Easter.