Español
Uncomfortable diary "Well, yes, I am racist and I do not rent to southerners"

"Well, yes, I am racist and I do not rent to southerners" 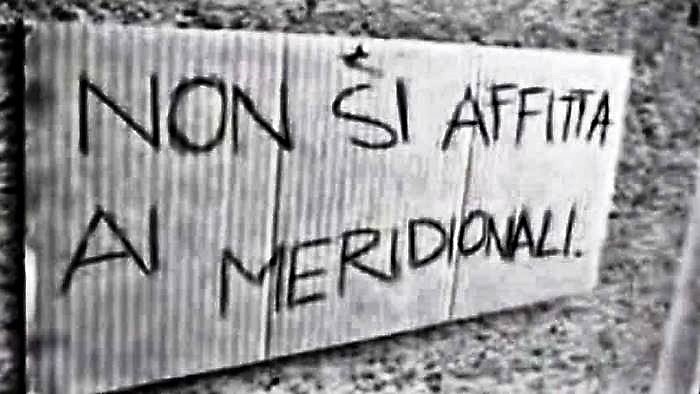 Roberto Tumbarello
Roberto Tumbarello, professional journalist, graduated in Law, has three children and six grandchildren. Medal "pro merit" of the Council of Europe, of which he has been spokesman in Italy for many years, is expert in Communication and Human Rights. He was editor and special envoy of several large circulation newspapers and periodicals. He ended his career as editor of the "Giornale di Napoli". Among his latest successful publications: "Was Jesus Right or Left?" (Sapere 2000, 2009), "Save yourself who can" (Edizioni Radici, 2012), "Either the bag or the life" (Armando, 2014), "Journey through life" (Armando 2017), currently in the bookstore.
16 September 2019
Uncomfortable diary

In the distant 50s, when people from the south emigrated to industrial areas, a similar notice was often read on announcements of pensions and family rooms. To find accommodation were workers and laborers, rough men, ethnically diverse. At the time, it was understandable that it would make him uncomfortable to rent his house. Unfortunately the South did not grow much, however it survived that humiliation. In fact, today, after the children, the grandchildren of those emigrants also study. Believing now in national pacification, they choose Po universities. But rent waste has reappeared, even for girls.

The citizen always at the mercy of domineering merchants

You don't want to hear the customer's reasons even when they are obvious. All governments - right or left, populist or sovereign - don't give a damn. There is no authority to turn to. We are continuously scammed and bullied by anyone who has our credit card in hand. With the complicity or negligence of accommodation companies, dilapidated hotels and B & Bs peddle photos and services at high prices. The rights of the traveler were once sacred. Today the uncomfortable low cost airlines impose their own regulations in spite of the civil code and international conventions.

Everyone laughs at the princess' tongues to the press, what stupid subjects!

Charlotte Windsor, William and Kate's second child, is already Duchess at the age of four. Whatever he says or does, everyone applauds amused. While of a child of the people it would be said that the parents are rude and that she is stupid. The charm of the caste, however, also justifies banality. If the girl is already mocking journalists and photographers, it is because she feels the entire court's contempt for the category at the palace. She is respectful with her great-grandmother, whom she rarely sees, because she knows her sovereign. As long as they don't grow, the royalty are smart too. We, however, do not even have the dignity to take offense.

Attention, slow down! In this country children still play on the street

It is a sign that should appear everywhere. Instead, it is a unique specimen at the gates of Arco, a town in Trentino on the banks of the Sarca, which, right there, flows into Lake Garda. It is an unusual warning that takes us back to an era when we were still human beings and respected others. A period in which, perhaps, we lacked many comforts, but we loved each other and we were happy. Nobody drove by consulting their cell phone, nor after drinking. Drugs were read in books and wondered what effects they had. Unfortunately it is not possible to go back, but to behave better, yes.

When the cleaning craze is foolishly deadly

I was a kid when the workers killed by carbon monoxide cried. Unfortunately, even today we die, as if it were the first time it happened, while cleaning a cistern or a well. Experience is not needed. The owner sometimes tries to help the victim and dies too. How come there is no safer system to clean those cursed places. Better to leave them dirty. From North to South, today in Matera, there is no season that does not reap a dozen victims. Yet those gases are known to be highly toxic and, without a protective mask, it is a safe suicide to enter them.

It is true that everyone has a different view of the law. But, for heaven's sake, let's not stray too far from the parameters that common sense suggests. Otherwise we lose sight of what remains of civilization and justice. 1 year and a half ago in Naples three boys bludgeoned a vigilantes to get hold of his gun. As they were still minors they were only sentenced to 16 ½ years. Today, while the victim's family is still in mourning, the judge grants one of the killers, without even a feint of repentance, a special permit to celebrate coming of age at home. And he also has a girlfriend!

How did we end up so low?

Once upon a time, which now seems distant in memory, women, the elderly, children and, even less, the disabled were not touched. If some coward dared to disrespect the weakest, there were immediately those who intervened to protect him. Today, however, the mockery and even the violence against those who cannot defend themselves is a spectacle that amuses and is filmed, to communicate it to other wretched people who have not had the good fortune to assist you. Nobody raises a finger. The bravest ones turn away. While a young Senegalese who finds a wallet with 2000 € delivers it to the owner.