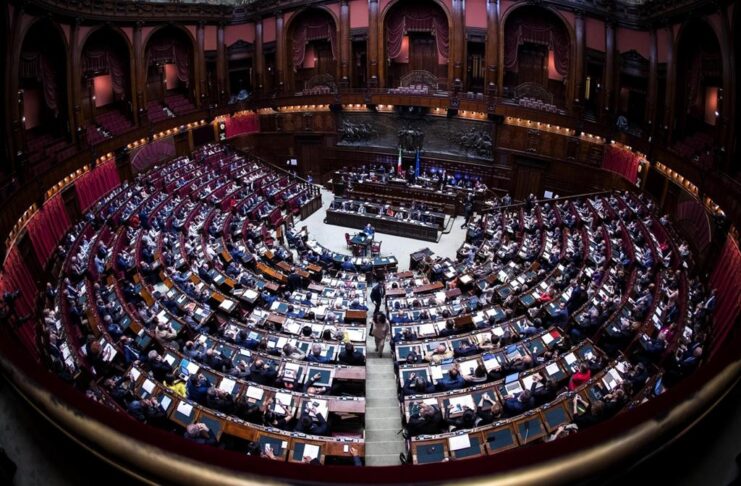 February presents itself as a month of two national innovations: the apparently favorable evolution of the pandemic and the government crisis that began as it had begun, that is, with a pathetic nothing, that is a "nonsense" or a supercazzola of cinematic memory.

The pandemic in Italy tends to decrease, while in the rest of Europe it beats the drum and in the perfidious Albion it assumes the characteristics of the massacre, as well as in the United States and Latin America.

In Italy, the yellow color of most of the territory is very auspicious as was the yellow flag of the ships asking for docking in port as a declaration that all, crew and passengers, were healthy and that no plague or epidemic was on board. In the collective imagination, however, yellow, even that of the nautical flag, ended up having the opposite meaning that the black and yellow nautical flag had instead. Then Gianni Pettinati with a very catchy and popular song, winner of Canzonissima 1966, brought the yellow flag back to its original positive meaning and many dance clubs have taken the name from it all over holiday Italy.

Today the yellow zone metaphorically raises its auspicious flag: restaurants and bars reopen at least part-time, a large category of entrepreneurs and workers find work and a lot of the population returns to socializing, to meeting others, around a table, in front of a coffee, a plate of spaghetti, a glass of beer. However, it is not a festive return from "free all" as it was last summer. Today prudence dominates, perhaps fear because in short, no one believes that it is over and that we should not start all over again. Vaccine or non-vaccine

But in these days, the three national and indeed world emergencies, health, social and economic, have been joined by the political one. Was it needed? Some say that it rains in the wet or rather that the quagmire widens. Will there be a new government? Made by whom? To do what? That everything changes so that everything remains as it was before? The clash arose over a short period of time: apparently due to the justice report of the Minister of Justice which would not have obtained the trust especially for the question of the prescription: the resignation of the Government avoided the distrust of the Minister and formalized the crisis.

But without going into the technicalities, for some time there were signs of disintegration of the majority that supported the government. The debates in Parliament had gradually taken on tones of absolute ferocity with insults and insults not only between the two parties, majority and opposition, but above all within the majority itself. Once, in the first Republic, governments fell in Parliament due to the fault or merit of the so-called "snipers" who today would be defined as "friendly fire": in the anonymity of the ballot box some Deputies or Senators of the majority, for reasons that are difficult to remember, they voted against the government they had publicly supported, causing its downfall. A so to speak modest procedure which however was defined as shameful. Today modesty has disappeared, injury has become a habit and in Parliament and even the President of the session lets it go!

The ferocious threat of the 20s of the last century returns to the ears of the right-thinking: “we will transform this classroom into a bivouac of maniples”, but without the echo it had then, because today those who scream and those who threaten have little depth. There is no politics, there are no ideals, but not even guiding ideas: it is a debate between dwarves, where someone stands up on tiptoe to look like the giant that he is not, because he always remains dwarf!

And here in the middle of the "fight" we see metaphorically waving another flag, the white flag. Is it that of surrender or truce? Incredibly, while in the pandemic yellow became the color of hope, in politics white, despite its candor, has become the color of despair.

So truce or surrender, but whose? Someone replies: between runaways as they say in Rome, or incompetent as the New York Times writes, funny or salacious and meaningful expressions. Unfortunately, politics, ideals, social beliefs, prospects for the future, for which to fight and to which to dedicate one's life, have disappeared even before the turn of the century. Access to politics is no longer reserved for those who believe in it, for those who have worked and studied to fill that role. Today access is casual and the interest for those lucky enough to access is mainly economic. Hence the abandonment of the alignments and the changes of shirts when it is necessary to self-cut the emoluments and the substantial refusal to favor the dissolution of the Chambers in order not to lose the substantial gains. Horror!!!

The general belief is that we cannot expect anything better from this Parliament and this political class in the near future and it is also doubtful that the demiurge on duty, loudly invoked by the people, can change the system because, for good that it was, will have to deal with this political class.